ABC of Enterprise Impact | ABC at Outcome Level ABC classification begins at the granular level of individual outcomes experienced by stakeholders, using data to describe those outcomes across the five dimensions of impact.

these norms were facilitated by the Impact Management Project and its Practitioner Community of over 3,000 enterprises and investors.

An enterprise can classify an outcome experienced as Acting to Avoid Harm, Benefiting Stakeholders, or Contributing to Solutions based on data across the data categories that underpin the five dimensions of impact. Outcomes can be classified prospectively based on goals, or retrospectively based on performance. 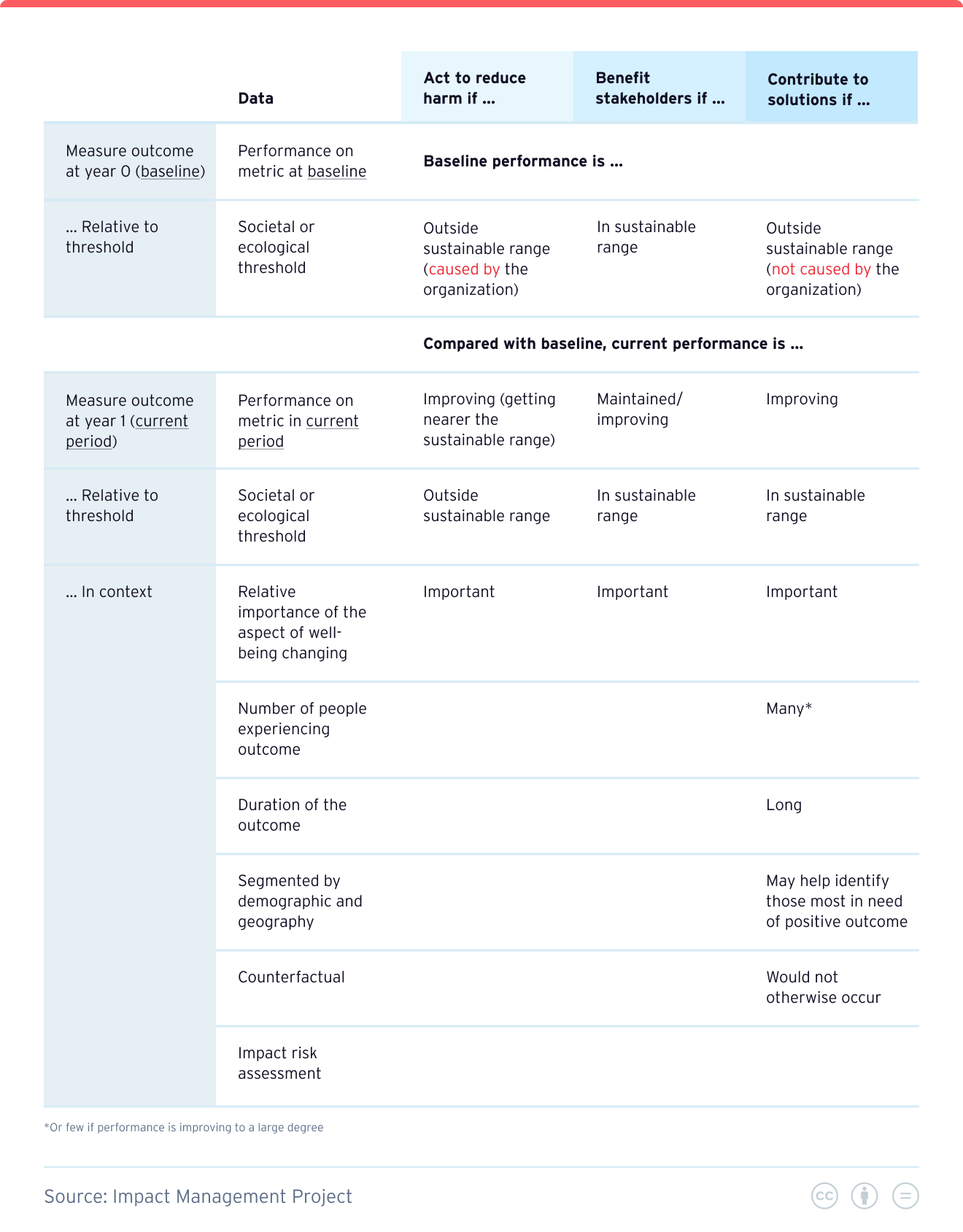 For simplicity, the ‘ABC’ of impact is referred to as a form of impact classification. However, “Benefiting stakeholders” is technically an outcome classification, as it is based on a level of performance rather than a change in performance and does not require causation.

“Act to avoid harm” and “Contribute to solutions” are both impact classifications, since they require change over time that is caused by the enterprise. They differ with regard to whether the original below-threshold outcome was originally caused by the enterprise itself (“Act to avoid harm”) or not (“Contribute to Solutions”), and whether the outcome has crossed the threshold into the sustainable range, or is expected to do so during the period for which goals are being set.

Menu
Menu
Menu
We use cookies on our website to give you the most relevant experience by remembering your preferences and repeat visits. By clicking “Accept”, you consent to the use of ALL the cookies.
Do not sell my personal information.
Cookie SettingsAccept
Manage consent

This website uses cookies to improve your experience while you navigate through the website. Out of these, the cookies that are categorized as necessary are stored on your browser as they are essential for the working of basic functionalities of the website. We also use third-party cookies that help us analyze and understand how you use this website. These cookies will be stored in your browser only with your consent. You also have the option to opt-out of these cookies. But opting out of some of these cookies may affect your browsing experience.
Necessary Always Enabled
Necessary cookies are absolutely essential for the website to function properly. These cookies ensure basic functionalities and security features of the website, anonymously.
Functional
Functional cookies help to perform certain functionalities like sharing the content of the website on social media platforms, collect feedbacks, and other third-party features.
Performance
Performance cookies are used to understand and analyze the key performance indexes of the website which helps in delivering a better user experience for the visitors.
Analytics
Analytical cookies are used to understand how visitors interact with the website. These cookies help provide information on metrics the number of visitors, bounce rate, traffic source, etc.
Advertisement
Advertisement cookies are used to provide visitors with relevant ads and marketing campaigns. These cookies track visitors across websites and collect information to provide customized ads.
Others
Other uncategorized cookies are those that are being analyzed and have not been classified into a category as yet.
SAVE & ACCEPT