these norms were facilitated by the Impact Management Project and its Practitioner Community of over 3,000 enterprises and investors.

To understand their own contribution to a social or environmental outcome, enterprises need to consider what likely would have happened in the absence of their activities. The data categories in the ‘Contribution’ dimension help enterprises and investors assess an enterprise’s contribution to the social (environmental) outcomes that people (planet) experience, relative to what likely would have occurred anyway (i.e., the outcome counterfactual).

Enterprises and investors operate in a dynamic social system, with various actors – from competing firms to government bodies to NGOs – seeking to contribute to the same set of outcomes.

Consider a solar energy company aiming to improve the health of Kibera slum residents by reducing kerosene use. This enterprise operates in an environment where other enterprises, government policies and NGOs are all striving to achieve the same outcome but through different mechanisms. Accordingly, if customers’ health improved by 20%, the solar energy company would need to consider how these other initiatives contributed to this percentage change, to understand its own contribution to the outcome.

The insights of the ‘Contribution’ dimension are essential.

More broadly, by considering their own contribution, enterprises deepen their awareness of the system they operate in – who the key actors are, how they interact, and what the levers for change may be. Equipped with this understanding, enterprises can work towards optimizing the entire system rather than a single intervention. This may mean developing a partnership with an NGO to reach last-mile consumers. It could also mean collaborating with government to upskill and increase the resilience of smallholder farmers.

In impact terminology, ‘Contribution’ overlaps with terms such as ‘additionality’, ‘deadweight’ and ‘attribution’. While they all seek to answer ‘what would have happened anyway?’ to derive an understanding of an enterprise’s contribution to an outcome, these terms often differ in methods and scope.

‘Contribution’ should not be mistaken with depth under the ‘How Much’ dimension, which covers the significance of the outcome by calculating the difference between the outcome in period and the baseline, without considering the influence of other factors (e.g., other organizations, economic conditions).

outcome in period – outcome that would have been observed anyway 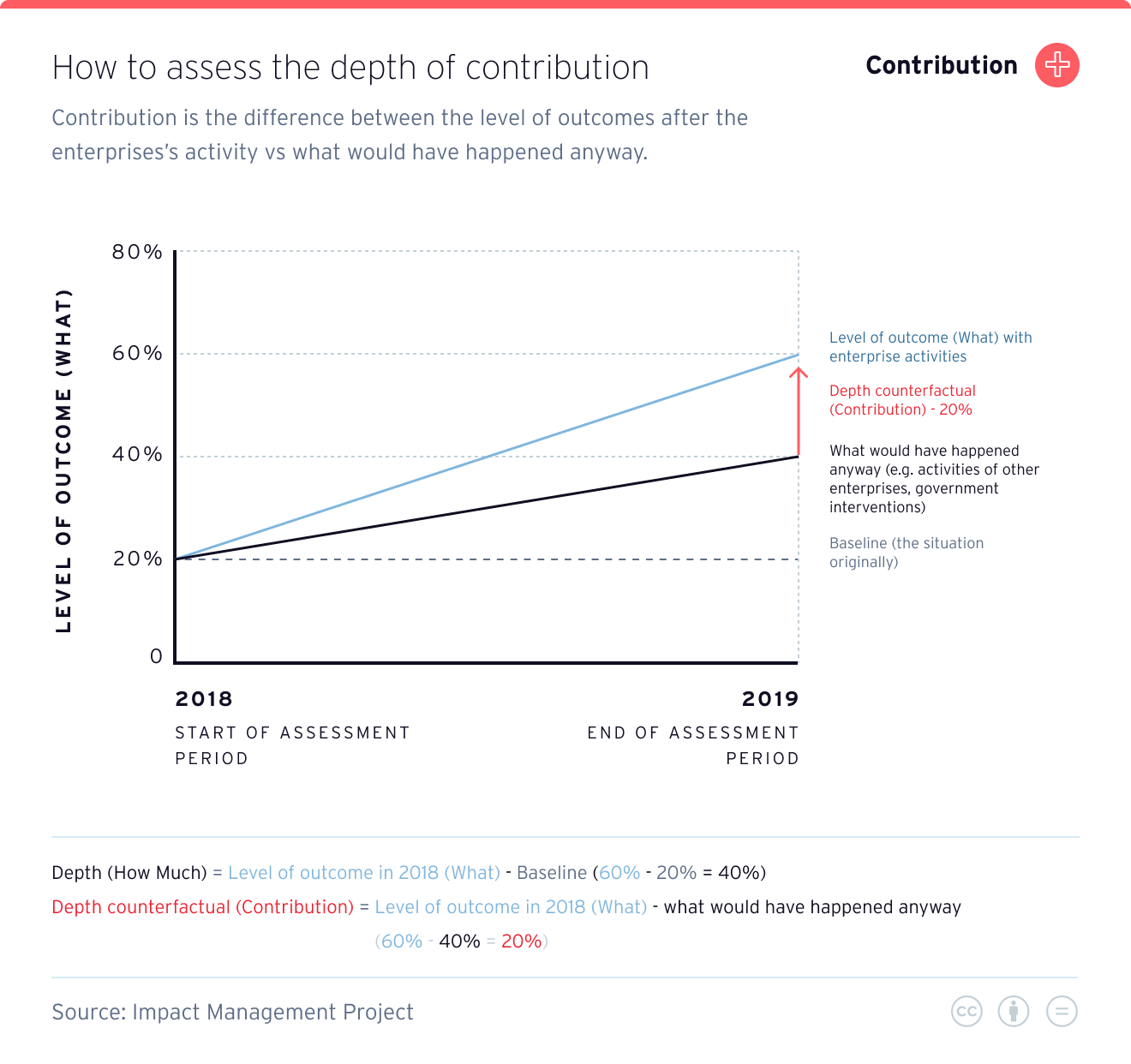 We have deliberately chosen the word ‘Contribution’ to cover all of the ways in which the counterfactual can be assessed — from market and evidence-based research to randomized control trials.

By 2011, One Acre Fund (OAF) had reached 78,000 smallholder farmers in Kenya and Rwanda — an impressive 145% year-over-year growth. The rapid scale and impact per farmer ($120 avg. increase in yearly income) convinced the East-African based organization to explore the Ghanaian market, with the view that it could serve as a potential launchpad for other West African countries.

After a few months of scouting, OAF launched a pilot program with 500 farmers, offering them a loan package with a half-acre of maize seed and fertilizer.

To understand the impact of the program and acquire lessons for scaling up in West Africa, OAF implemented a threefold approach:

One Acre Fund found that its existing intervention was not well-suited to the Ghanaian market, making its contribution to outcomes minimal.

First, farmer reliance on agriculture was low, with farmers also generating an income from other sources.

Second, the maize-based program was implemented in a region where there was a stronger focus on cash crops. While OAF quickly pivoted to another region with ideal farming conditions, the organization realized that the addressable population was too small to make the business model work.

Third, upon moving to the new area, a lack of rainfall plagued the farming season. OAF soon discovered that these droughts were not an anomaly, but a regional shift towards semi-arid growing conditions.

Based on these findings, OAF decided to shut down its Ghanaian operation, but not without gaining important lessons through the process, including the need to: (1) professionalize country scouting units; (2) constantly adjust and innovate during pilots and scale-ups; and (3) locate operations far from large urban cities when commercial agriculture and non-agricultural activities dominate.

How can enterprises evaluate their contribution?

To estimate the outcome counterfactual, enterprises can use several approaches that vary in rigor and costs. Randomized control trials and quasi-experimental methods typically require significant resources but produce stronger evidence of contribution compared to market research and stakeholder feedback. However, carefully-designed market research and stakeholder feedback can yield valuable insights for (1) understanding what else may be driving the outcome, (2) building a ‘good enough’ counterfactual scenario, and (3) conducting the depth analysis. Moreover, these methods can often be combined to gain complementary findings.

Randomized control trials (RCTs) are the most common form of experimental research. RCTs measure the difference in outcomes over time among two randomly assigned groups:

When randomization is not cost-effective, ethical, or practical, quasi-experimental methods (e.g. regression discontinuity design, difference-in-difference) provide a range of statistical techniques to build experimental groups. Once these groups are created, practitioners compare the difference in outcomes over time between individuals who received the intervention and those who did not (the counterfactual). In contrast to RCTs, quasi-experimental methods require many more assumptions to develop a credible counterfactual.

Practitioners often find research done elsewhere and extrapolate the results to their own situation. When doing so, they should assess the generalizability of the original research by considering the study’s methodological rigor, population group, country setting, and type of intervention. For example, if an Indian enterprise relied on an estimate from an impact study that took place in Argentina – a country with significantly different socio-economic characteristics – then the generalizability of this estimate is likely to be low, rendering it unusable. Enterprises should exercise caution in extrapolating research results to other settings, and complement such extrapolation with stakeholder feedback and market research. Sources of evidence-based research include J-Pal’s evaluations, Innovations for Poverty Action’s research and 3ie’s systematic reviews.

We use cookies on our website to give you the most relevant experience by remembering your preferences and repeat visits. By clicking “Accept”, you consent to the use of ALL the cookies.
Do not sell my personal information.
Cookie SettingsAccept
Manage consent

This website uses cookies to improve your experience while you navigate through the website. Out of these, the cookies that are categorized as necessary are stored on your browser as they are essential for the working of basic functionalities of the website. We also use third-party cookies that help us analyze and understand how you use this website. These cookies will be stored in your browser only with your consent. You also have the option to opt-out of these cookies. But opting out of some of these cookies may affect your browsing experience.
Necessary Always Enabled
Necessary cookies are absolutely essential for the website to function properly. These cookies ensure basic functionalities and security features of the website, anonymously.
Functional
Functional cookies help to perform certain functionalities like sharing the content of the website on social media platforms, collect feedbacks, and other third-party features.
Performance
Performance cookies are used to understand and analyze the key performance indexes of the website which helps in delivering a better user experience for the visitors.
Analytics
Analytical cookies are used to understand how visitors interact with the website. These cookies help provide information on metrics the number of visitors, bounce rate, traffic source, etc.
Advertisement
Advertisement cookies are used to provide visitors with relevant ads and marketing campaigns. These cookies track visitors across websites and collect information to provide customized ads.
Others
Other uncategorized cookies are those that are being analyzed and have not been classified into a category as yet.
SAVE & ACCEPT